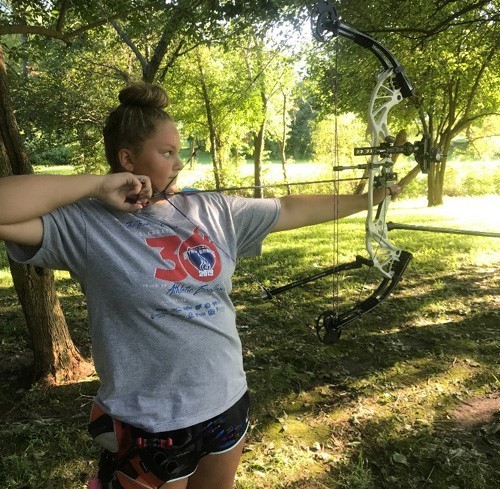 TOPEKA, KAN.-With a turnout of over 6,800 athletes, the 30th Anniversary of the Sunflower
State Games had more than a few star competitors considered for the honor of being named 2019 CoreFirst Bank & Trust Athlete of the Year. This year, Kylie Lynn Hayes, 14 of Gardner, has been honored with this recognition. In order to be chosen as a recipient for this award, an athlete must show outstanding achievement and good sportsmanship both on and off the field of play by embodying what the Sunflower State Games represent, living a healthy lifestyle through participation in sports.

Kylie Lynn Hayes, the 2019 CoreFirst Bank &Trust Female Athlete of the Year, brought
home two gold medals this summer in 3D Archery and Target Archery. A current Freshman at
Gardner-Edgerton High School, Kylie has been competing in the Games since 2017. Hayes
enjoys the opportunity to compete in the Sunflower State Games as it provides her with new
competition and to spend time with friends and family. "My favorite aspect of competing in the Sunflower State Games is that I get to see a lot of friends and meet new people. I think it is neat to meet people who share the same interests. I always have a lot of fun and it is such a great experience,” said Hayes. "The Sunflower State Games have become an important part of our state because they help form a bond between the young, the old, the rural and the urban parts of our state using sports as a common thread. With its wide range of activities, it has something for everyone.” Kylie is an avid Archery enthusiast who has placed in countless shoots over the past three years and currently holds three state records. In her spare time, Kylie enjoys hunting, interior design, and mentoring the Daisy Girl Scout Troop.

The 2019 Sunflower State Games were held July 12-28 in Topeka and hosted 6,825
athletes who competed in 44 different sports. To learn more about the 2019 Athlete of the Year recipients please visit www.sunflowergames.com. The Sunflower State Games is a non-profit organization located in Topeka with a mission to promote physical fitness, personal health and well-being for Kansans of all ages and skill levels.