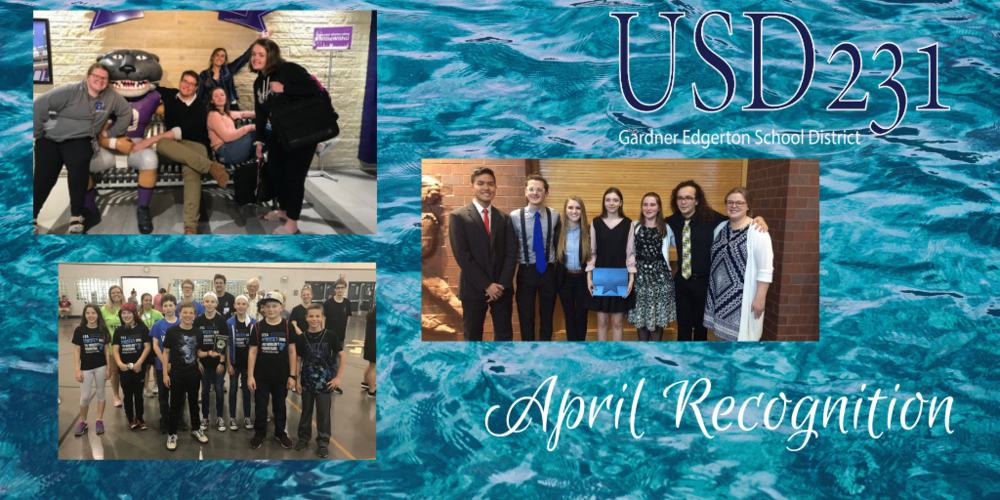 April was a great month of success and awards for the Gardner Edgerton School District.

The JCCC Shooting stars Gala was Sunday, April 7.  GEHS had seven finalists. Jordan Proctor won the top scholarship ($1400.00) in the Strings Category. There were 98 finalists from all over Johnson County.  These students are the best of the best in each of their categories.

The Shooting Stars Recognition, Scholarship & Awards Program was created in 1997, by former Arts Council of Johnson County chairman Bob Endres. Bob’s vision was to create a program that celebrated young Johnson County artists for their artistic excellence in high school. In other words, only the best of the best high school artists are chosen to participate in the ShootingStars Program!

To participate in Shooting Stars you must be a 12th grade student who lives in Johnson County, Kansas, be nominated by an arts faculty member from your high school, and submit an Application. Once the Arts Council receives your nomination and application you become a Shooting Stars Finalist.

Pictured from left to right are:

Our Middle School Robotics teams competed at Emporia State last week, and they did exceptionally well!  We competed against other middle and high school teams, as well as several college teams! Out of eight total awards given at this tournament, Gardner brought home five of them.  The schools and robotics coaches are very proud of all ten of our Gardner teams.

Wheatridge brought five teams to ESU: Microbots, Robo Chickens, Bot Miller, Harry Botter, and Illumiboti Confirmed.  All teams had high scores at one time or another in the tournament! Bot Miller ended up making it to the playoffs and earning fourth place overall out of forty teams.  In addition, Illumiboti Confirmed received the Team Spirit award and Harry Botter received Best Design out of the twenty teams on their field. Congratulations, Mustang Robotics!

Pioneer Ridge brought three teams to ESU: War Machine, The Matrix, and Na Na Na Na BOTMAN.  All teams had reasons to celebrate at this tournament! The Matrix and War Machine made it to the playoffs and The Matrix earned third place overall out of forty teams.  In addition, Na Na Na Na BOTMAN received Best Design out of the twenty teams on their field. Congratulations, Jaguar Robotics!

Trail Ridge brought two teams to ESU: Marshmallow Martians and Galactic Gardner.  They put aside their programmed LEGO robots to dabble in the art of metal robots! With only a few weeks to build, these teams came together and had completed robots ready in time for their very first ESU tournament.  They did an incredible job and their coaches are very proud! Congratulations, Husky Robotics!