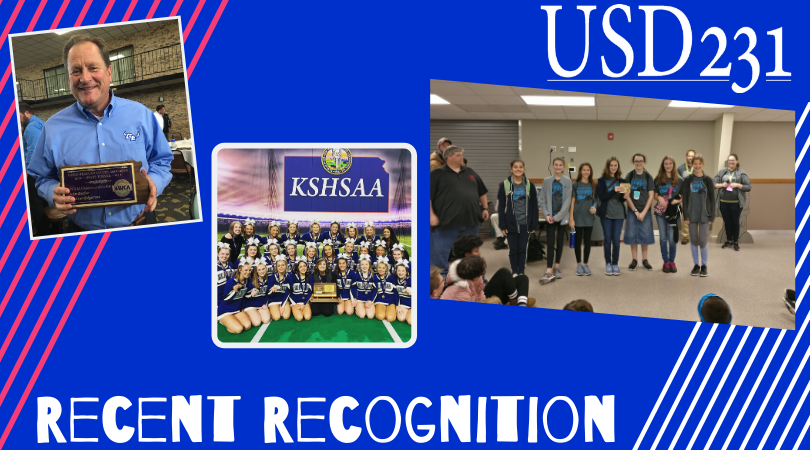 The Kansas Wrestling Coaches Association announced their award winners for the 2018-2019 season. All awards are voted on after the state tournament at the KWCA Spring Executive Board Meeting. The 6A KWCA Administrator of the Year was John Sedler, Gardner Edgerton High School Athletic Director. Sedler was notified of the award in the spring and was presented his award in October at the Hall of Fame banquet in Salina, Kansas.

Wheatridge and Pioneer Ridge Robotics teams attended their fall tournament on November 21. Out of 40+ teams, WMS teams Robot Downey Jr and System Failure, and PRMS Ratchet all made the playoffs. That means almost half of the teams in the finals were ours!

WMS team Harry Botter brought home the Engineering Design award, and PRMS Ratchet earned 1st place in the whole tournament! All of our teams represented Gardner well, and we are so proud of Mustang and Jaguar Robotics.

Gardner Edgerton High School is a Kansas State Finalist in the 10th annual Samsung Solve for Tomorrow Contest, a $3 million* nationwide competition that encourages 6th -12th grade students to creatively use STEM (science, technology, engineering and math) skills to solve a community challenge. From a pool of more than 2,000 entries nationwide, only 300 schools have been selected as a State Finalist – and the Blazers were one of them! GEHS is the only school from the KC Metro area that is a finalist. Congratulations to the team of Charli McGill, Beau Oxley, and Kyron Saunders.

The Gardner Edgerton High School Cheerleaders placed 3rd at the KSHSAA State Cheer Competition on Saturday, November 23rd, in Topeka. The squad placed 3rd out of 23 teams competing. Congratulations to the team and coaching staff on this accomplishment.