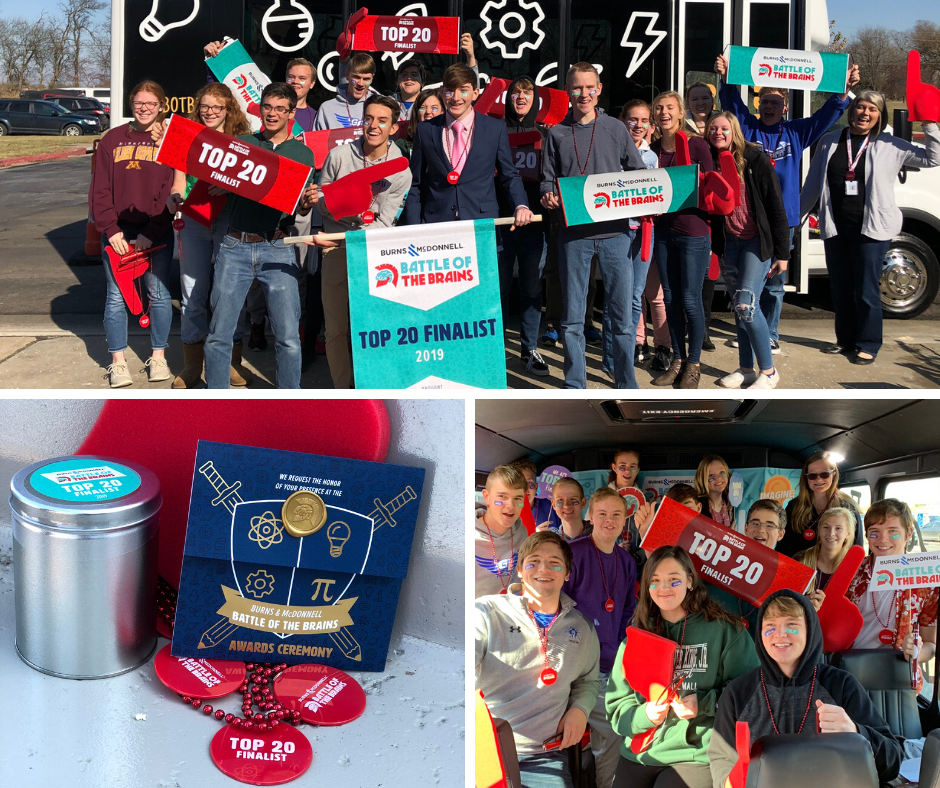 KANSAS CITY, Missouri — Armed with everything from banners and medals to popcorn and Silly String, crews loaded a fleet of “battle buses” and drove to schools across the Greater Kansas City with a single mission — surprise the top 20 finalists teams in the Burns & McDonnell Battle of the Brains competition. A record 7,250 students entered Kansas City’s largest STEM (science, technology, engineering and math) competition, in which schools can win grant money and a chance to inspire the next $1 million exhibit at Science City.

“We pulled up in front of each school, used our megaphones to get the students outside and literally rolled out the red carpet for them,” says Julee Koncak, Foundation director, Burns & McDonnell. “Some students were so excited that their idea could soon be an exhibit at Science City that they were crying with joy.”

Each top 20 finalist team is guaranteed to win a piece of $155,000 in grant money to use toward STEM education. The grand prize-winning team will receive a $50,000 grant, along with the opportunity to work alongside Burns & McDonnell and Science City STEM professionals to transform the winning idea into a $1 million permanent exhibit at Science City. Students in the competition have inspired five exhibits now on display at Science City.

“The number of students participating in Burns & McDonnell Battle of the Brains has nearly tripled since we started this competition just eight years ago,” says Ray Kowalik, chairman and CEO, Burns & McDonnell. “To me, that means the interest in STEM among Kansas City kids is skyrocketing and that makes me incredibly happy.”

This year, participation in Battle of the Brains hit a record level:

The top 20 finalists’ schools in the Burns & McDonnell Battle of the Brains, and their exhibit title, are:

Judges, comprised of STEM professionals from Burns & McDonnell and Science City, followed a stringent evaluation process to rank entries according to specific criteria, ranging from creativity and inspiration to how interactive and engaging the exhibit could be with visitors.

The public weighs in for the final round of the judging process beginning Nov. 15. Everyone is invited to vote for their favorite entry by going to www.botbkc.com/vote. The public vote counts for 30% of the final selection. More than 70,000 votes were cast during the last competition. Online voting ends at 11:59 p.m. Nov. 22, 2019. The grand prize-winning team will be revealed at the awards ceremony on Dec. 4, 2019, at Union Station. - Courtesy Burns and

To learn more about the GEHS project - http://www.tiny.cc/botbgehs